Gross Facts That Will Have You Calling For Termite Control

Termites are some of the most despised pests on the planet, but not for the reasons you might think. Generally, when you think of bugs that give people the shivers you think about spiders, scorpions, or even cockroaches. But as termite control professionals we see that people’s fear of termites is based more on the risk they pose to homes without proper termite control. Do termites rate on your yuck-meter? Maybe they should.

Here are some facts that termite control experts want you to know about termites.

You may not realize it, but termites are pretty heavy. Not individually, of course, but the combined weight of all of the termites in the world is nearly 450 million tons. That number might not mean much until you realize that all of the humans in the world don’t weigh that much. That’s right, the termites of the world outweigh the people of the world by about 100 million tons. Are you creeped out enough to hire a termite control service yet? Just wait, we’re only getting started!

Termite Colonies Can Be Enormous

The termite colony living in your home can have thousands of termites in it. Some colonies have been known to have up to millions of termites. But wait, don’t call your termite control company yet. In 2018 a termite megapolis was discovered in Brazil that ranges from 690 to more than 3800 years old. The millions of termite mounds that make up this underground superhighway for bugs take up an area the size of Great Britain. Can you imagine encountering a termite colony that large? The country of Brazil is wishing they had invested in termite control right about now.

By now you’re probably wondering how in the world a termite colony could grow that large. It would take an insane commitment to expansion for one queen to produce that many babies. You’re never going to believe this next creepy fact. Some termite queens can lay around 20 eggs every minute, that’s tens of thousands of termite eggs every single day. Reproduction at that rate can get out of hand very quickly which is exactly what happens to homeowners all over the world who wait too long to hire a termite control company.

Termites Were On Earth With Dinosaurs

That’s right, termites have been on the planet for well over 100 million years. Not the exact same termites that are crawling around the earth today, but an early version. Can you imagine how much they have learned and adapted to their environments in that amount of time? DIY termite control rarely stands up to millions of years of evolution.

This sounds dramatic but it’s actually true. Unlike the rest of us, termites are perfectly happy working 24 hours a day, seven days a week with absolutely no time off, until they die. Their commitment to work is part of the reason they’re so problematic for homeowners. Without consistent termite control, you’re working against an army of pests that simply will not give up.

Some Termites Can’t Feed Themselves

This is admittedly the grossest of all the gross facts we’ll share with you today. Termites exist within a caste system that includes three levels: soldiers, workers, and nymphs. Soldier termites guard the colony but lack the ability to do other simple tasks like feeding themselves. Here’s where it gets gross. These soldier termites rely on others to feed them by depositing pre-digested food into their mouths. This single fact doesn’t put your home at extra risk from termites, but it does raise the yuck factor significantly.

Termites can be found in every state in America except for Alaska. So no matter where you are, if you are a homeowner it’s worth keeping your mind focused on termite control. The amount of property damage caused by termites every year is in the billions of dollars. That’s right, those little prehistoric pests cause more damage every single year in the U.S. than the GDP of some small countries. If this incredible statistic doesn’t convince you to invest in termite control there may be nothing that does.

This whole article is a fun look into the weird and sometimes gross world of termites. We hope you walk away amused and at least a little bit more informed. But most importantly, we hope you walk away with an awareness of just how complex these little pests are. From the age of the dinosaurs to today, termites have been working day and night to degrade the structures around them. In the wild, this is a valuable role. Termites in the jungles turn fallen, rotting trees back into soil making room for new life to spring up. However, that same talent when turned on your home can do an unbelievable amount of damage. We tell you all of this not to scare you, but to remind you of exactly what homeowners all around the country (except in Alaska) have to contend with. If you’re concerned about the effect that termites may have on your home, contact us today and we’ll connect you with a termite control specialist from our team.

For more than 40 years, Holder Pest Control has committed itself to providing excellent and dependable service to Volusia County.
Contact Us
Our Volusia County service areas include: 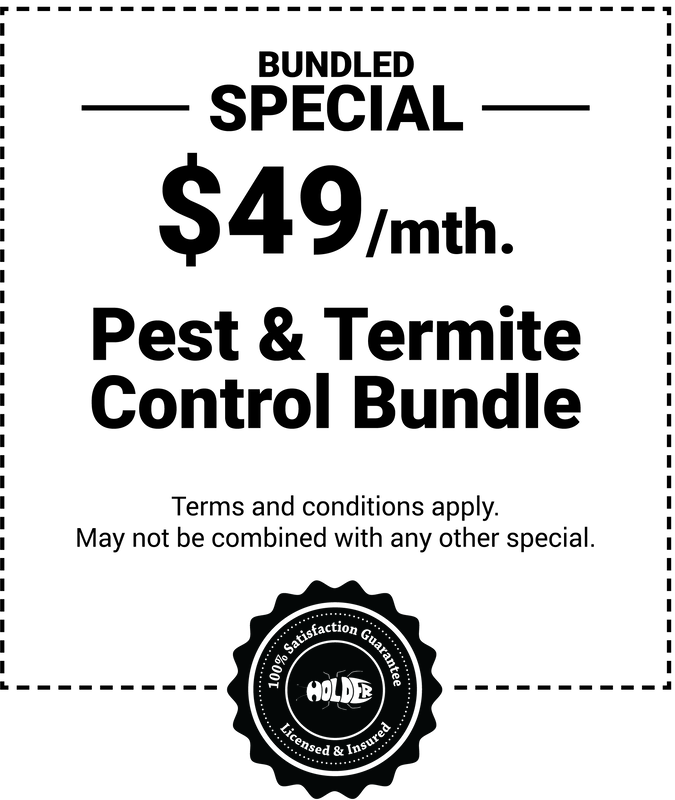